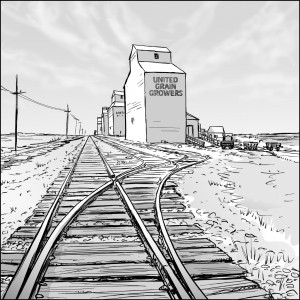 A new project is boiling in my mind; scratch build a grain elevator.

First a bit of history of Grain Elevators
The need for Grain elevators emerged in the mid 1800’s in North America when agriculture moved to a cash crop economy following the invention of the Cyrus McCormick Mechanical Reaper.

The McCormick reaper machine revolutionized farming methods enabling wheat farmers to begin mass production of grain crops. The storage of grain and its transportation was both labor intensive and time consuming.

Joseph Dart watched the shipping activity, and the tremendous effort required to unload the grain and his idea to mechanize the process and store the grain was born.

Purpose of the Grain Elevators
The purpose of the steam-powered grain elevators, housed in tall, house-like structures, was to provide a facility to load, unload, handle and store agricultural products such as corn, wheat, oats and barley. The commodities would then be transported to market via boats and the railroad.

How did Grain Elevators work by Railroads?
The concept of the grain elevators was quickly adapted to be used to transport grains from local farms on the Great Plains into the storage system ready to send to distant markets via trains.

This type of system was called the country elevator which typically contained a “boot” into which farmers deposited their crop as opposed to the “marine leg”. These tall, 2 or 3 story, rectangular-shaped structures ranged from 40 – 60 feet high which led to the nicknames of “Prairie Cathedrals” and “Prairie Skyscrapers”.

Above the lower workhouse section, a ‘headhouse’ (cupola) was constructed topped by a gable roof.

The workhouse contained a conveyor belt and bucket system driven by machinery that lifted the grains from the “boot” to the head house.

The grains were spouted to a series of bins in the headhouse for bulk storage.

The storage bins had openings from which which the grain emptied into chutes connected to waiting railroad cars.

(source: US History for Kids)

On Youtube: The history and architecture of grain elevators and their evolving roles as prairie icons. Also checkout the story of Esterhazy’s restored 1906 flour mill.