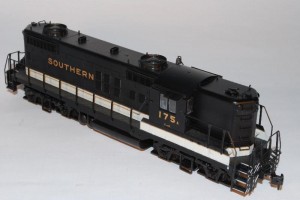 Part 1 – overview
The next project will be the restoration and rebuild of a more than ten years old model of a Proto 2000 Southern GP18 of the first run.

These locomotives predated DCC. There was no circuit board in them, just a diode bundle for the directional lighting.

Goal of the project will be all new electrical wiring, new LED lightning and build in a DCC decoder with sound.

The unit was bought on a model railroad convention as a cheap secondhand item. There was a note in the box telling there was a problem with the wiring of the lightbulbs of the unit.

So, the first work that has to be done is the complete removal of all electrical wires from the locomotive.

Prepairing the body shell and weight
When the unit was striped of al the electrical wires I tested the motor and gears for proper running. It seems that the unit was running very good.

Next step is preparing the long hood for a speaker and LED’s. I will mount a small speaker under the grill at the end of the long hood.

Therefore I had to remove some of the material behind the grills. I also removed a little piece at the inside of the lamp lenses to provide room for a LED.

The space around the speaker must be sealed so a little baffle is created. After that I have to remove a piece of the metal weight to create space for the speaker.

In the short hood is enough space for a decoder since the metal weight is designed for a unit with a low nose.

I had to ensure that the motor is completly isolated from the frame besause the frame is connected to one side of the wheels.