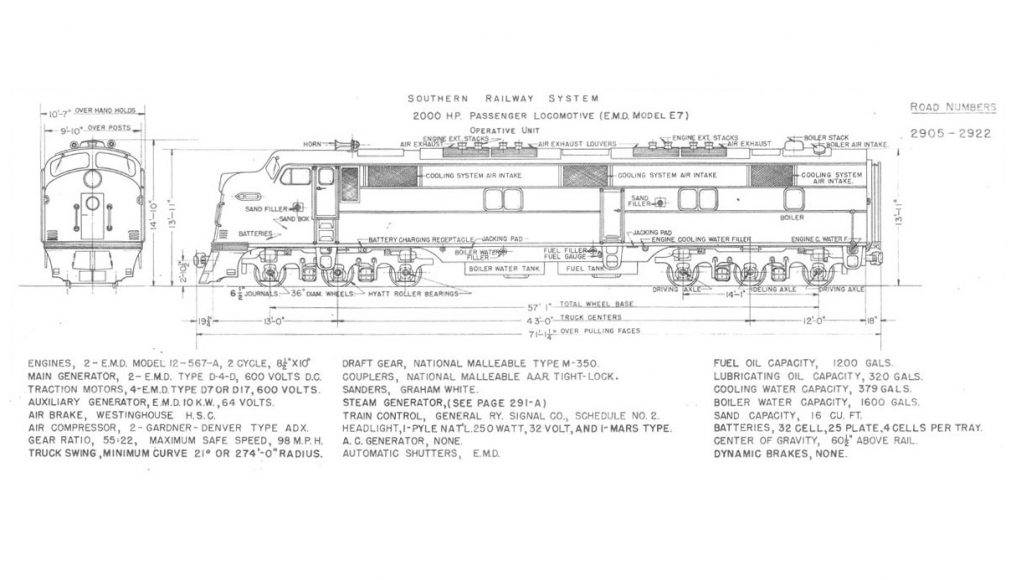 The E7 was the diesel most railroads chose to lead their new post-war streamliners. Introduced in 1945, it retained the square windows and air intakes found on earlier models, but an additional grille behind the cab and the bulldog nose (introduced on F units) gave it a unique appearance.

The E7 proved to be the best seller of the series, with 428 built through 1949. From the correct bulldog nose to the full cab interior to the authentic paint and lettering, these models are a welcome addition to a HO streamliner fleet.

The 2,000 hp was achieved by putting two 1,000 hp, 12 cylinder, model 567A engines in the engine compartment. Each engine drove its own electrical generator to power the traction motors. The E7 was the eighth model in a long line of passenger diesels of similar design known as EMD E-units.

Compared with other passenger locomotives made earlier by EMD, the noses of the E7 cab units had the appearance of a bulldog’s snout when viewed from the side. Therefore, the E7, E8, and E9 units have been nicknamed “bulldog nose” units. Some units made before these models were called “shovel nose” units or “slant nose” units because of their appearance.

A Gulf, Mobile and Ohio Railroad E7A features at the start and end of the 1967 film In The Heat Of The Night.

The only E7 that survives today is owned by the Railroad Museum of Pennsylvania, in Strasburg, Pennsylvania and is ex-Pennsylvania Railroad E7A #5901. This locomotive has been cosmetically restored, and is on indoor display.

From Wikipedia, the free encyclopedia